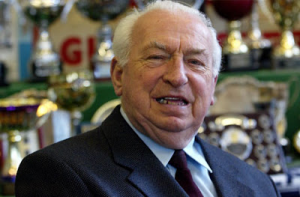 Evan Bryson, a founding member and former club secretary of Redheugh Boys’ Club, passed away aged 82, in Tyne View Nursing Home, Gateshead. For 50 years Mr Bryson devoted all his time and energy to his obsession – football. And the 82-year-old, formerly of Hyde Park Street, saw thousands of youngsters pass through the doors of the Gateshead-based club over the decades. Throughout his time as manager and club secretary, Mr Bryson nurtured the likes of Paul Gascoigne; Newcastle winger Tommy Robson; Liverpool, Middlesbrough and England forward David Hodgson; and Scotland and Sunderland star Don Hutchison. His enthusiasm and dedication to the beautiful game was recognised in 2004 when he was awarded an MBE. As news of his death broke, his former players and club associates paid tribute to a “football legend”. Former Southampton manager Ian Branfoot, who started his career at the club, said: “Mr Bryson was a very honest and he looked after the boys’ club very well. “It was a great achievement when he was awarded his MBE and it made his life all worth while. He was a marvellous man, who cared so much about the club.

The long-term success of the club and the amount of talented players that moved on from there was down to Mr Bryson.” Mr Bryson’s association with the boys’ club goes back to 1957, when his friend Billy Charlton, who ran a boxing club for boys in the area, asked him if he’d help stretch the activities to include football. It was then that the boys’ club was born, starting with an under-18 side. Over the years, Evan made many sacrifices, not least being that he never married and got to see children of his own playing football.

Sports co-ordinator Terry Ritson, 56, of Lobley Hill, Gateshead, who took over from Evan a few years ago, said he would be a huge miss. He added: “I can honestly say I have never met a more genuine and honest guy as Evan. He never had a bad word to say about anybody and he was always there to help anyone. He lived for the club and the sport and was on hand all day every day. He was Mr Redheugh – a true football legend. “Not only did he help the kids with the sport, he guided them on life and pointed them in the right direction.”