We are delighted to introduce you to Paul Bryson.  Paul started at Redheugh and went on to have a fantastic 38 years in the game. 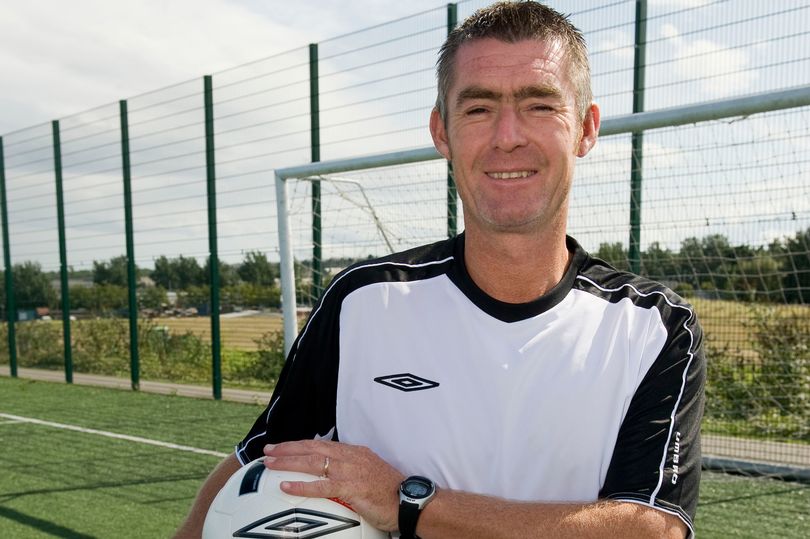 Below is his great track record:

We asked Paul to write some words about his time in the game:

I joined Redheugh Boys Club in 1977 when I was 13 years of age. I was representing Gateshead boys and some of the players asked me to join the club and said you will really enjoy it.  They were not wrong I had 5 years of my best footballing days at the club.  I loved every minute of it as it provided me with great memories, opportunities, meeting fantastic people and making lifelong friends.

I met Evan Bryson, Alan Blackburn, Alec McPherson, Tommy Leonard, George Alberts, Terry Ritson, Micky Hughes and Dennis Washbourne.  They collectively showed excellent values of Respect, Humility, Discipline and Hard Work.  All traits that I have took with me since leaving the club whether it be in playing, managing or coaching.  I will be forever grateful to all of them.
We trained Tuesday and Friday nights at Rose Street School before playing our games on a Sunday for the u14s.  I loved the training and comradery that much I used to train other nights with the older age groups too.  We used to train with Zeppy first (im sure all players will never forget your backs to wall and legs at 90 degrees) Zeppy was great disciplinarian.  After our fitness work we would play game on outside tarmac or if weather was poor we would play 1v1, 2v2 with soft ball indoor.  It was struggle to get us out of the building as we loved being there.

My first game for the u14s was against Grainger Park.  I was playing centre forward and was fortunate enough to score 6 in a 10-3 victory.  Dennis Washbourne was our manager.  He always encouraged myself and the team and wanted us to express ourselves. 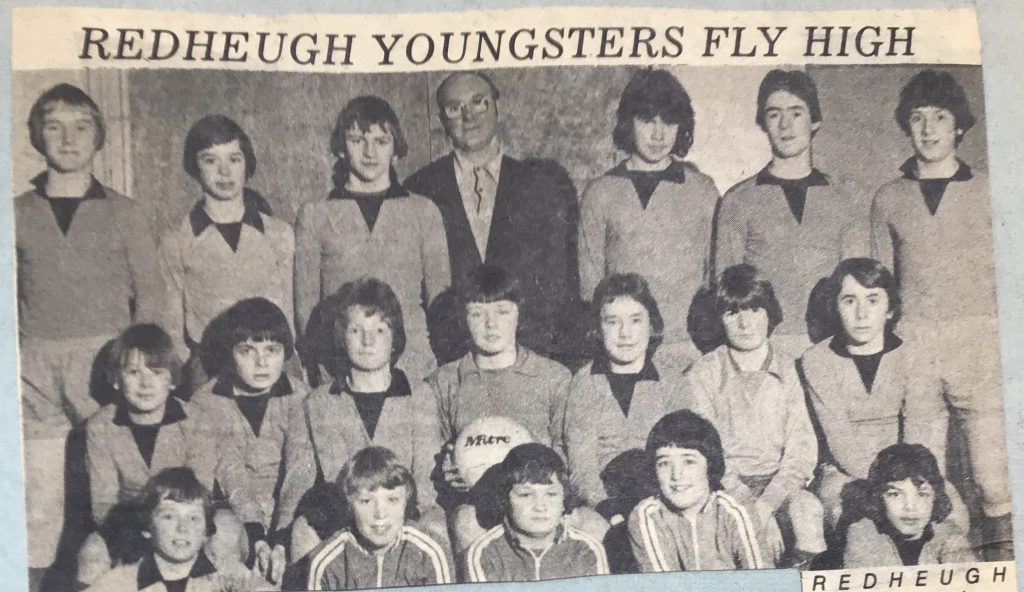 That season we won every game which was a great achievement.  We had some outstanding players in the team of which 5 went on to be apprentice footballers at professional clubs.  Early in my Redheugh days I was asked to sign schoolboy forms for Middlesborough FC when I turned 14. 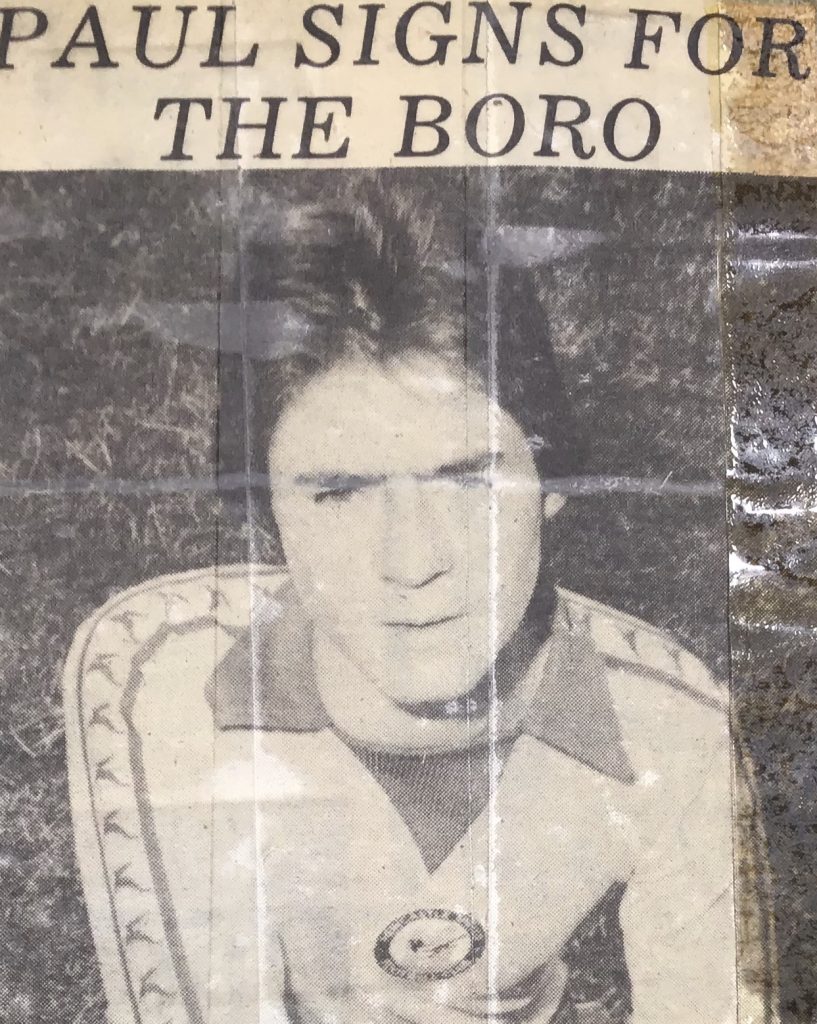 I was very excited with the opportunity and would go to Middlesborough during school holidays while still training and playing for Redheugh.  Whilst I enjoyed Middlesborough I did not fulfil my potential while I was there and got released at 16.  The Middlesborough youth team consisted of Tony Mowbray, Darren Wood, Steve Tupling and Michael Harrison who was a good friend and also from the boys club. 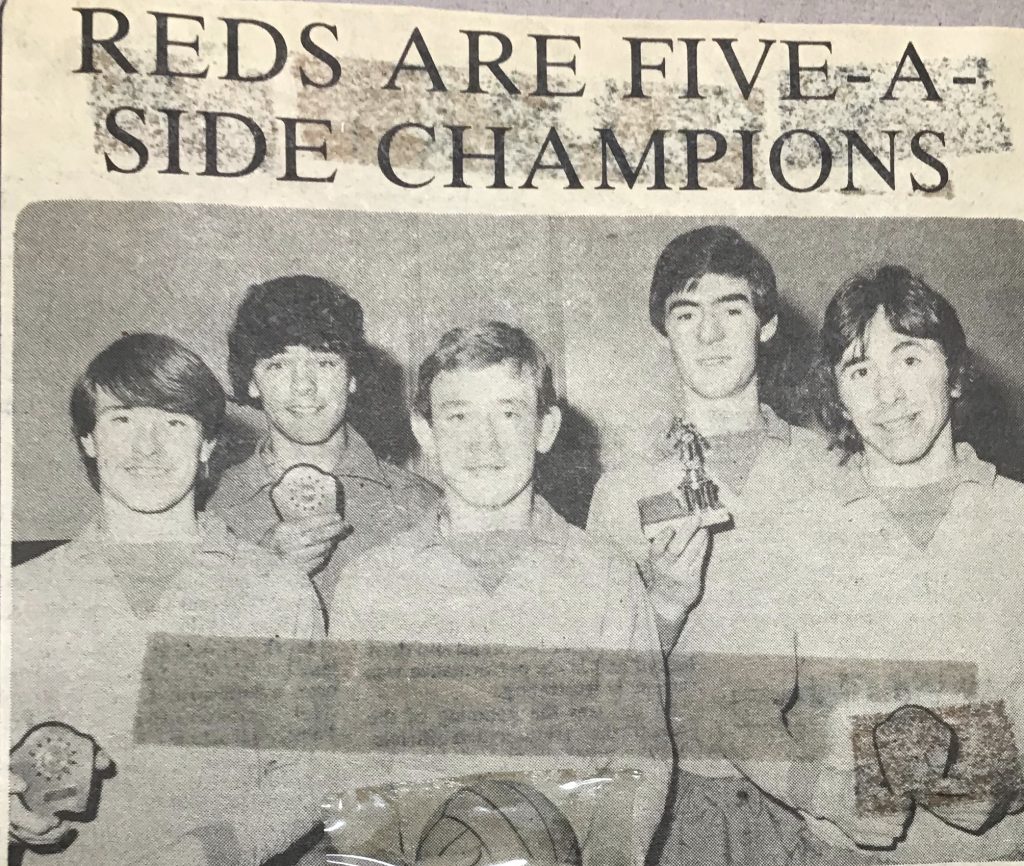 In my second year at Redheugh I was an U15 and I represented the U18 B team. 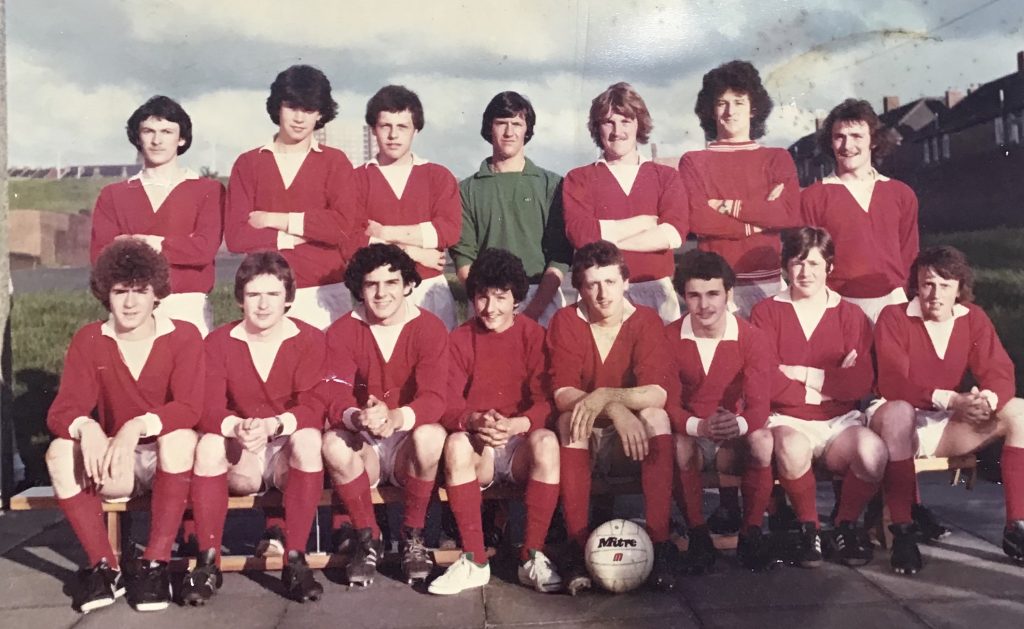 We played in the Jarrow and District League.  This was excellent for my development and very challenging playing 3 year up.  The team was ran by Alec McPherson who was a great guy and character.  Mr Mac as we called him was great to play for and his enthusiasm rubbed off on the team.  Again we were very successful winning the league and cup double.

My granddad played a big part in my development.  He worked with Alec at Redheugh Iron and Steel works, a place where I worked later mainly thanks to Alec for recommending me. My granddad would love watching myself and Redheugh play.  Wherever we played he would be there in rain, hail or snow watching quietly in the background. 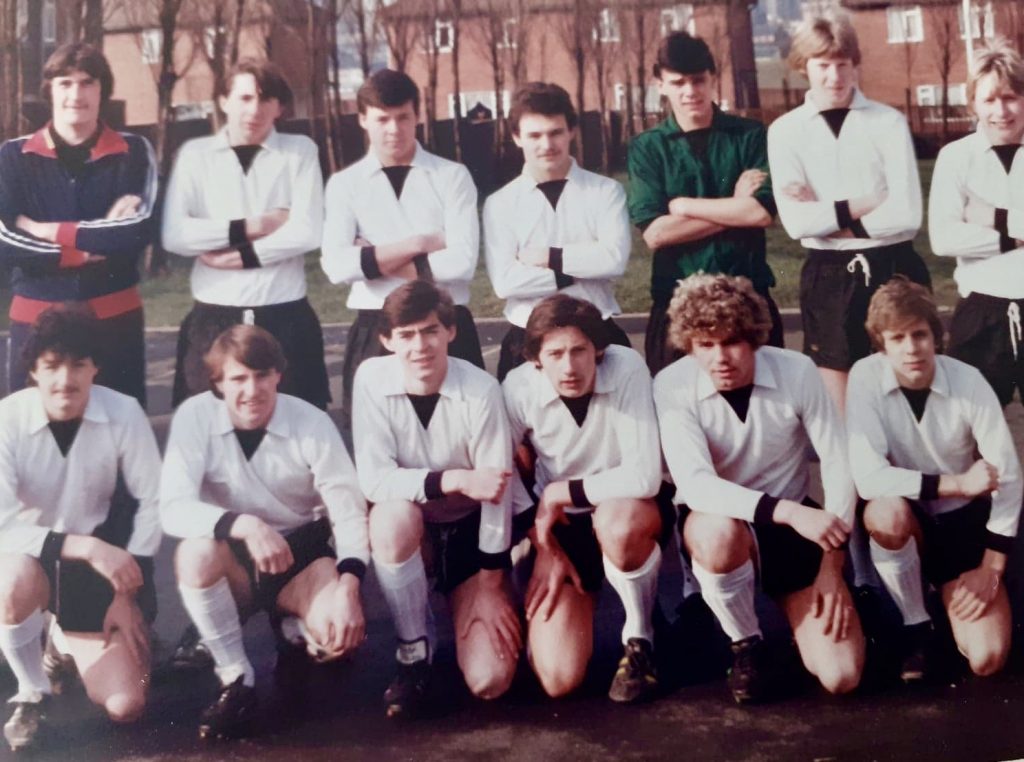 Evan Bryson was our manager.  Evan was a great guy.  He had a good eye for a player.  He was very protective of his own players.  He wanted us to enjoy, work hard and express ourselves when playing which was a theme throughout the club.  We had 3 very successful season winning lots of silverware.  We had the great experience of the Ayr International Tournament in 1980.  It was a great experience getting to the semi final only to lose to a controversial goal against Hearts u18.  In 1981 I represented to the Durham County Boys team.  This again gave me a fantastic experience.  The team was managed by Alan Watson who I have kept in touch with from all those years ago.  We reached the semi final of the National Gillette Cup.  We played Merseyside County at Sunderland’s Roker Park.  We drew 2-2 AET then travelled to Tranmere’s Prenton Park for the replay.  We drew this game 3-3 AET and won in penalty shootout 5-4.  I was fortunate to score in shootout.  We then played Suffolk in the Final at Ipswich’s Portman Road.  This was a fantastic occasion and game.  We won the game 4-3 in a thrilling encounter.  The occasion was made even better by Sir Bobby Robson presenting us with the trophy!

My playing footballing career after leaving Redheugh was in the non league.  I played for 25 years and loved every minute of it.  My clubs included Tow Law, Spennymoor, Gateshead (only for short period due to work commitments), Eppleton, Dunston, Chester-le Street (player manager) Birtley (player coach) and Consett (player coach). 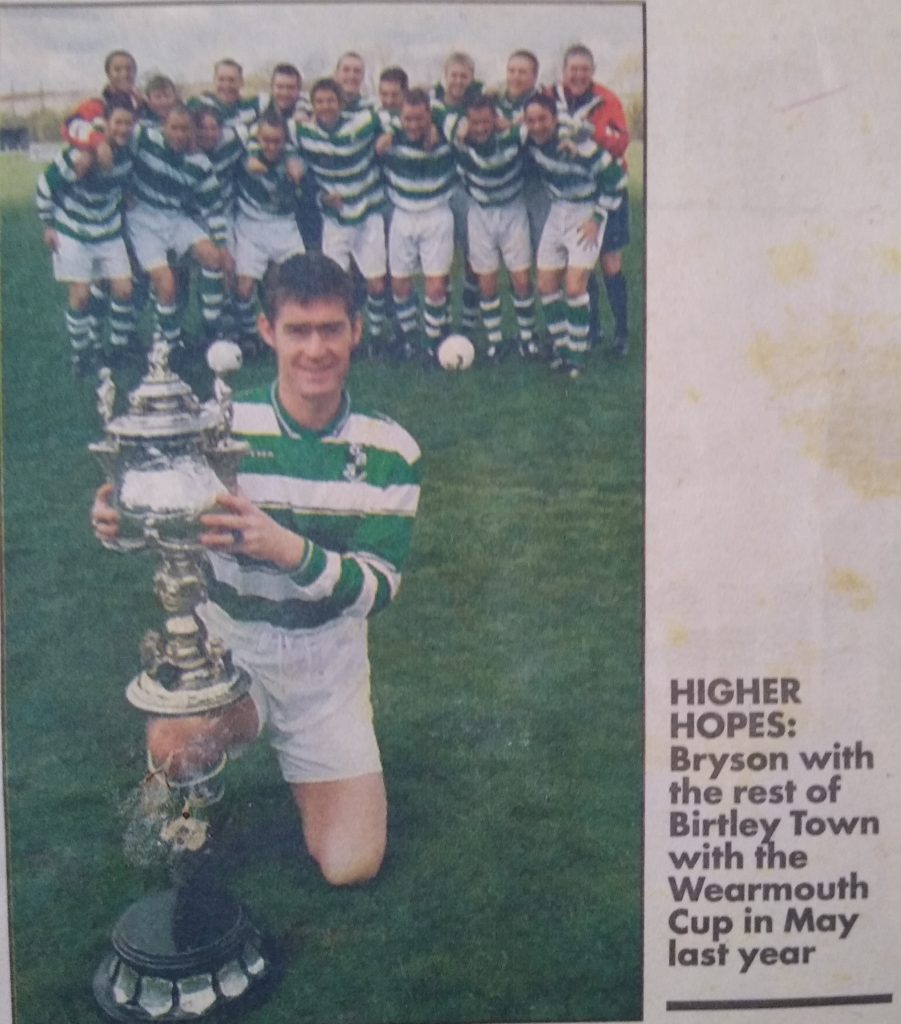 Over my time of playing I was very fortunate to be involved with good successful clubs.  A few highlights were playing for Tow Law against Bradford City at Valley Parade in the first round of the FA Cup.  Also at Spennymoor we played Tranmere at the Brewery Field in the first round of FA Cup.  Tranmere were managed by the legend Frank Worthington.  We gave a good account of ourselves only to lose 3-2.

My spell at Eppleton where I played for 5 year were really enjoyable. 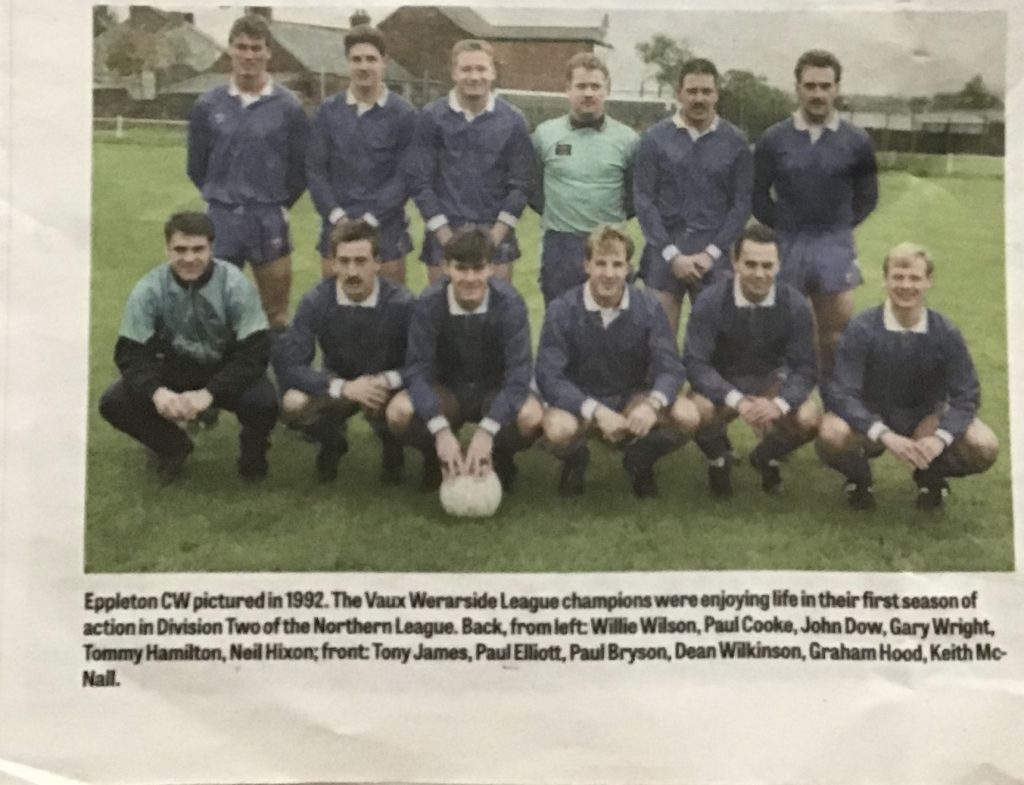 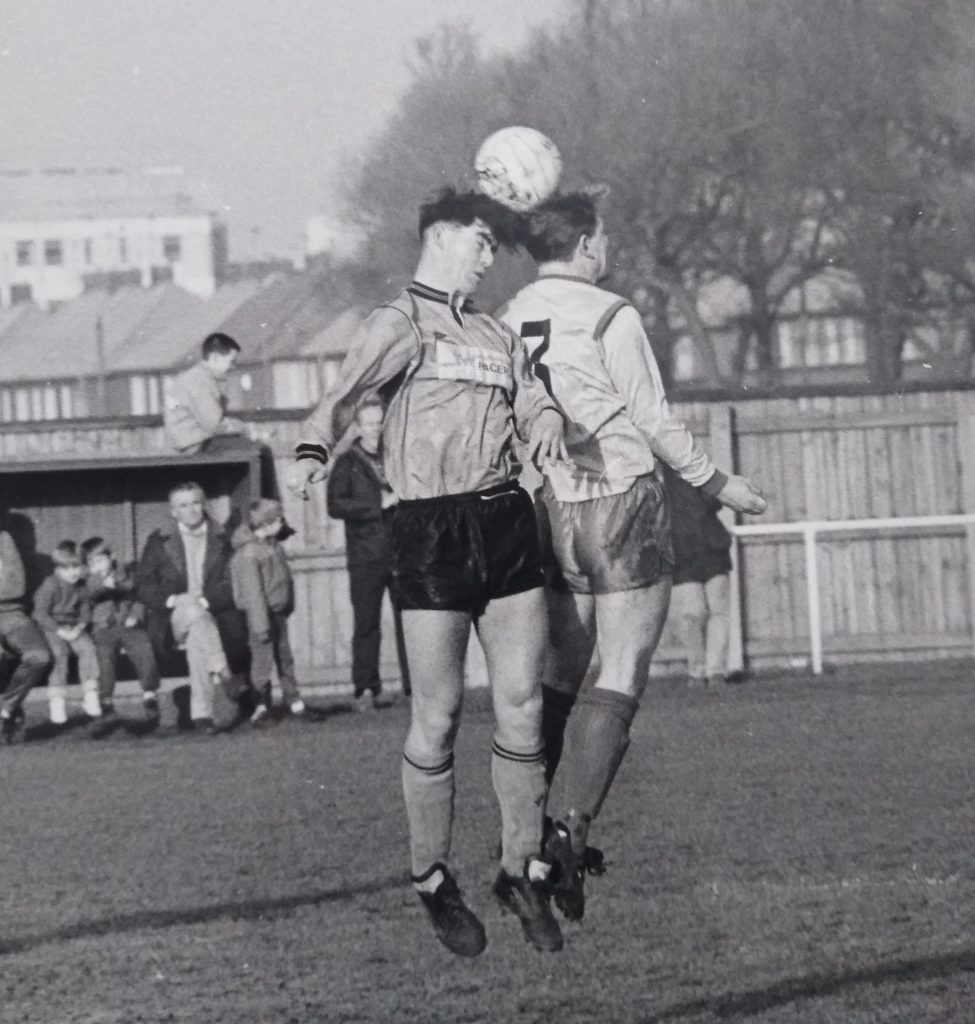 We were very successful and I enjoyed playing for the manager, Stu Sherwood.

In 1997 I took the player manager role at Chester–le-Street.  This is when I first started to think about coaching.  I took my Preliminary badge and really enjoyed it.  I then looked to complete my level 2 before completing my UEFA B Licence in 2000.  I started to work part time for Sunderland in 2001.  The coaching commitment still allowed me to play part time for Birtley and Consett before retiring in 2007.

I was offered the full time role of Head of Football at Gateshead College in 2002.  This was the best decision I have ever made.  I had 13 great at Gateshead working for Alan Snowdon who was the Head of Sport.  Alan was very influential in my coaching career and I will be forever grateful to him.  We took the academy from 20 students in my first year to 160 when i left in 2015.  We grew the department so we could cater for Elite, Development and Participation players.  The Elite team was really successful winning National Leagues and Cups.  We also helped players get back into full time football namely Chris Basham of Sheffield United and Adam Reach of Sheffield Wednesday.  During my time at Gateshead we had 40 students that signed for professional clubs and a further 60 went onto American Scholarships.  The link with Gateshead College and Gateshead FC became stronger.  It was excellent for the students as they had a realistic opportunity to sign professional as Gateshead were full time playing in the National League.

I was fortunate to coach The England College National team from 2005-2013.  This was a great experience. I also became a FA coach educator and coach mentor.  This gave me opportunity to go back into clubs like Redheugh and Cleveland which I really enjoyed.

I had been working with Sunderland part time and the opportunity to go full time came along in 2015. 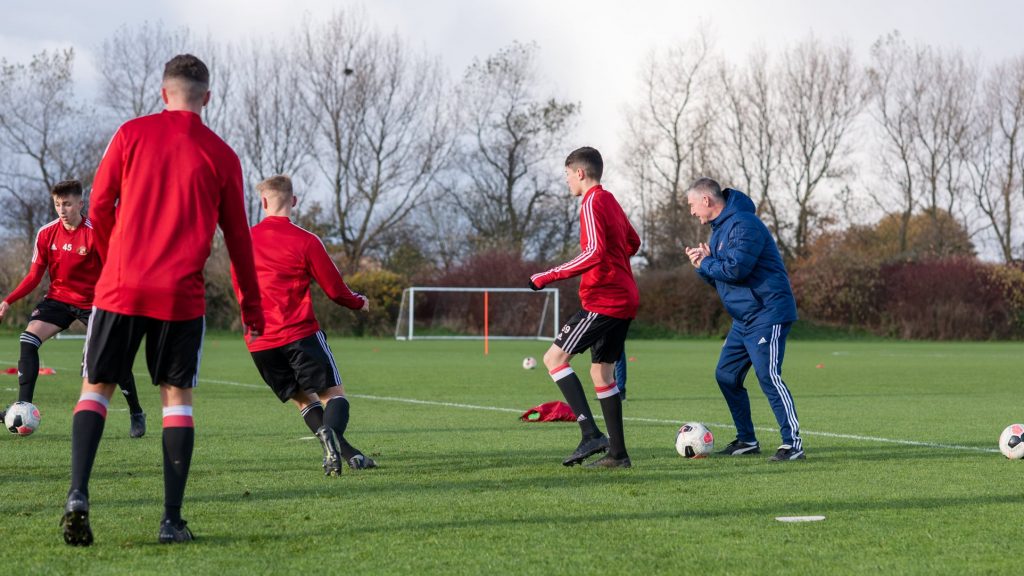 The opportunities are more now with the Elite Player Performance Plan in place at professional clubs.  I started in the youth phase but now have progressed to the profession phase coaching the u18s.  Over the years it has been excellent having a little part to play in Jordan Henderson, Jordan Pickford, Martyn Waghorn’s and many other players’ development.

It has been a long but very enjoyable journey.  It has filled me with great memories, met great people and i have made lifelong long friends.  Many Thanks again to Redheugh.

We would like to thank Paul for his brilliant words and allowing us to publish his personal photos.  We wish him all the best for the future, all the best Paul!!