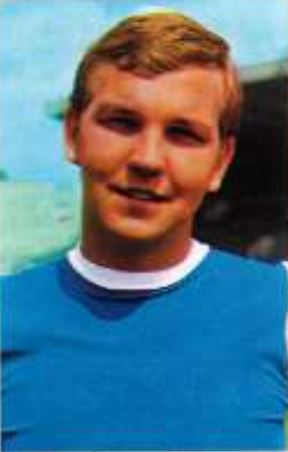 We are very proud to introduce you to former Redheugh player Colin Symm.  From Redheugh Colin went on to have a successful professional playing career, including playing in the same Redheugh, England Boys Club and Sheffield Wednesday team as Ian Branfoot.

Below is Colin’s story in his own words along with some of his personal photos:

When I was in the fifth form at school my mum and dad were looking for a football club for me to play for. My mums cousin (Uncle Joe), who was a Barber on Tyne Rd.  Uncle Joe was also the father of Tommy Robson (that would make Tommy my half cousin), who had just signed for Northampton Town from Redheugh Boys Club.  Uncle Joe took me to the boys club where I met Evan Bryson, Tommy Leonard and Alec McPherson.

At the time that the boys club was sited within the Teams, before moving to Rose Street school.  I was completely hooked by the place and attended the club at least four times a week.  The club at that time had A, B and C teams all under 18.  I started in the C team, then graduated to the B team.  The B team played in the Jarrow and District League.  Tommy Leonard was the leader of the boys club at that time and he had watched my progress with great interest.  Around this time we were to play a West German side (Westfalia juniors) at Redheugh Park – Gateshead FC’s ground.  Tommy insisted that I play against the German side and I never looked back after that, I was a regular in the a team, and was even selected to play for the Durham County Boys Club under Duncan Gibson for two years.  I look back at that time and the all encompassing memory that the greatest influence on me was Mr. Evan Bryson, who taught me how to conduct myself both on and off the field.

It was at Redheugh that I met my best friend Ian Branfoot (Branny).  We played in the A team at Redheugh together (in a very successful side) as well as in the County side, even winning the Gillette Cup where we beat Hampshire in the final 6 – 1 at The Crystal Palace.

Ian and I even went on to play for England boys clubs together against Wales and Scotland and soon after ended up at Sheffield Wednesday.

It seemed we were inexplicably linked until I went to Sunderland and Ian went to Doncaster Rovers, before once again reuniting again at Lincoln City.

When I was just 17 I was sent for trial at Northampton Town, with Rob Fuller from Wrekenton Juniors.  They wanted me to sign but my mum and dad didn’t want me to go because they thought I was too young.

It was at this time that Redheugh became the junior side of Gateshead FC, the Player Manager of the first team being Bobby Mitchell (the ex Newcastle left winger) who played in the successful Newcastle Cup winning team of 1955.  Branny and I progressed to the reserve side until Bobby Mitchell played me in a first team game against the Newcastle United side which was to include a guest appearance by Jackie Milburn.  The match had been arranged to help raise money for Gateshead FC.  I was then included in the first team and played in the North Regional League which included the reserve sides of Middlesbrough and Sunderland.  It was also at this time that Ian Branfoot and I had a trial for Newcastle.  We played for the Newcastle Juniors team against Doncaster Rovers and both scored in a 2-1 win.  Word came back after the game however that Gateshead wanted too much money for us and believed they had better players in the squad at the time.  My ambition was always to be a professional footballer, but to be turned down by your hometown club was a kick in the teeth.

Soon after however, it was when Ian and I played for England boys club that a scout recommended us to Sheffield Wednesday.  Our trial was a reserve game against Bolton Wanderers.  We must have played well because we were both asked to sign for Wednesday after the game. 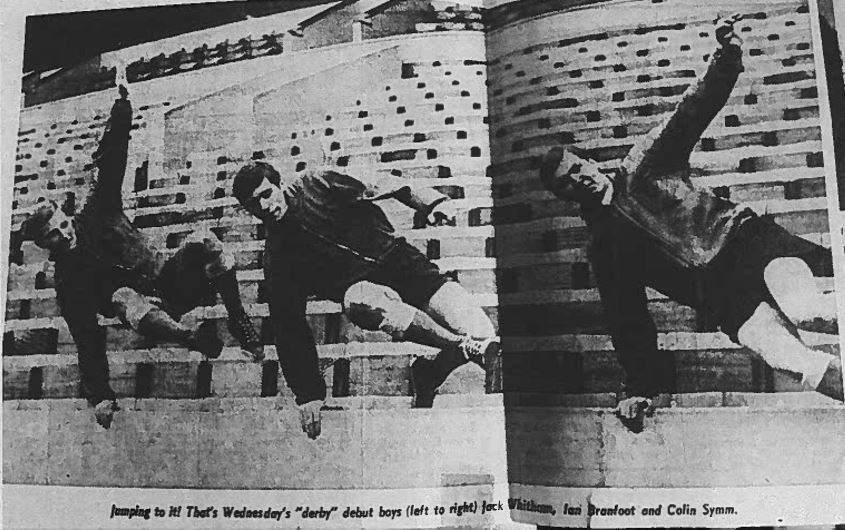 As part of the deal in signing for Wednesday we played a game against Gateshead.  The reserve team that day had an average age of 18.  We drew 4-4 and once again Jackie Milburn guest appeared for Gateshead. 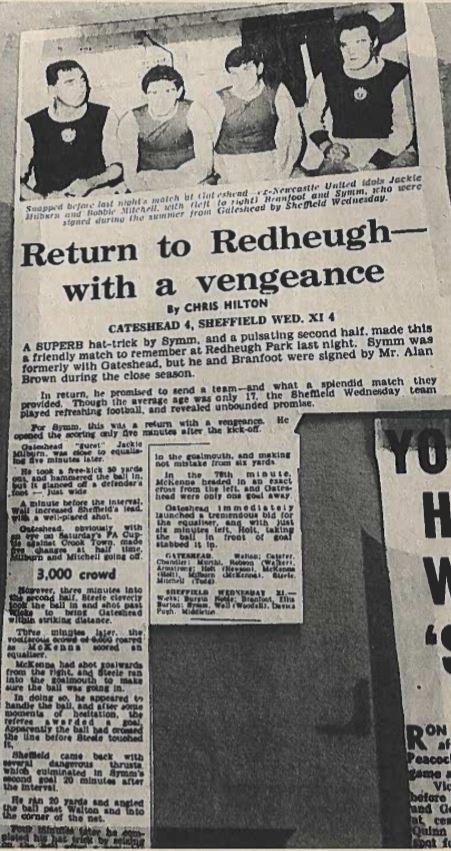 When you join a professional club you think you know how to play football but Ian and I had to learn our trade and there was no better teacher than Alan Brown, the Manager at Sheffield Wednesday.  He was one of the first to play 4/3/3 and indeed Wednesday became known as the wingless wonders.  In our first season in 1965/66  Wednesday played in the cup final against Everton.  The same year England won the world cup of course and while they were achieving that we were on tour in Bulgaria.  My first team debut was also against Everton at Goodison Park in the following year.  Alan Brown believed in youth and his coaching was at least 10 years ahead of everyone else.  His handling of young players was exceptional.  Also at this time, Lawrie Mcmenemy who was our coach at Gateshead, had joined the staff at Sheffield Wednesday.  I played several times for the first team over the next two years, playing against great players, but even when you weren’t playing the boss would take you as a substitute or as first reserve to keep you involved in the squad.  In 1968 we went on tour to Mexico and played at the Azteca stadium in Mexico city, we were the Guinea pigs for the England team who were to play in at the 1970 World Cup.  The England doctors monitored us in training because Mexico City was at altitude.  When we came back from that trip we would learn that Alan Brown had taken the job at Sunderland and in turn I was placed on the transfer list.  Jack Marshall took over from the boss and I didn’t get along with him at all.

I followed “the Boss” soon after to Sunderland. 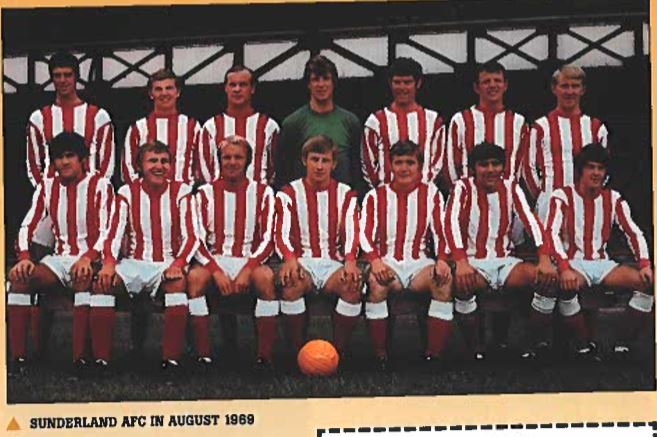 I was still a First Division player and I was coming home to the North East.  Unfortunately, Sunderland was not a happy time for me as we were relegated in the first year I was there.  Sunderland however were great to me, most of the time I languished in the reserve side because the squad were very talented, with youngsters that would go on to play in the 1973 Cup final.  I can remember we once went to play at St. James’s park and turned over the Newcastle Utd first reserve team who were playing regularly in the central League.  While I was there we also played and beat Darlington’s first team in the Durham Senior Cup.  At this time I was even fortunate go on tour and played in the Anglo Italian Cup against Lazio in Rome and Fiorentina in Florence.

I was released by Sunderland and signed for Lincoln City in 1972. 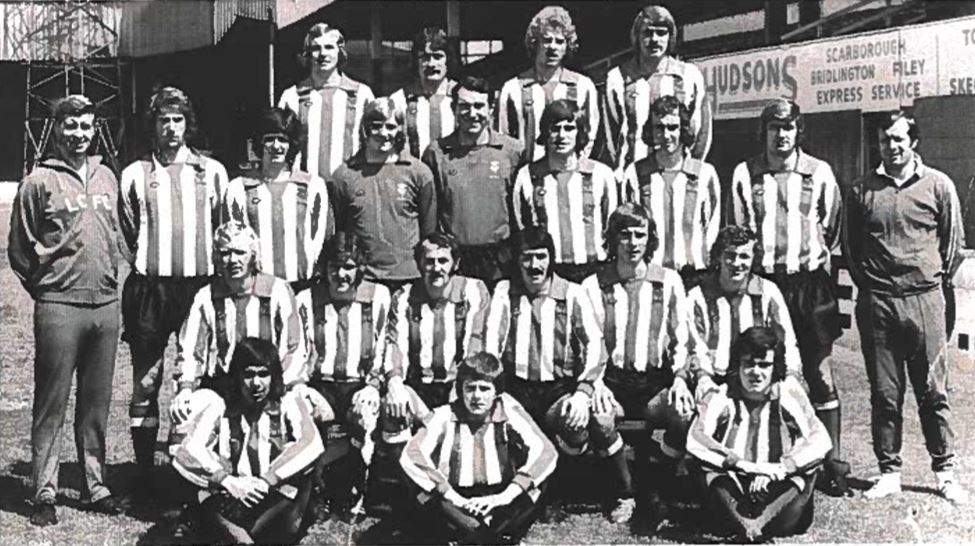 David Hird, the ex Arsenal and Man United player, was the manager.  Graham Taylor was a player at Lincoln City and he was my roommate on away trips.  David Hird was soon however sacked and Graham became the manager.  The club became more professional in its outlook under Graham.  Several new players were signed including Sam Ellis who I had played with at Sheffield Wednesday and Ian signed from Doncaster Rovers.  I enjoyed my time Lincoln until the final season, when early on in the campaign I was badly injured which required an operation.  It was a frustrating time because I only played the last two games of the season and for that reason Graham had to release me.  I was 28.

Graham was friendly with Howard Wilkinson who was the manager of Boston United.  Howard was someone who I played with at Sheffield Wednesday.  Howard was also the FA North regional coach and he said I had to think about my future carefully.  The chairman at Boston was great to me so I signed for them and it turned out to be the best three years of my career.  I moved into Sports Centre Management, as well as playing in a very successful side, and enjoyed my time there before moving back to the North East.

I attribute much of my time in football to my roots.  In my opinion, there is no better club than Redheugh.  Under the guidance of a great man such as Evan Bryson and the Management Team I was provided with the ideal beginning to my career.

Long may such a worthwhile community club last.

All at Redheugh congratulate Colin on his successful career, thank him for his words and wish him All the Best!!!